Shopping Cart
Your Cart is Empty
Quantity:
Subtotal
Taxes
Shipping
Total
There was an error with PayPalClick here to try again

Thank you for your business!You should be receiving an order confirmation from Paypal shortly.Exit Shopping Cart

Below is a brief video of the females pups from our Wrath x Rage breeding. This is an Old Family Rednose (OFRN) x Chavis (CH. Ellison) breeding. None of the pups are available, just sharing. This video shows a good depiction of the typical temperament you will see from a Southern Inferno pup. Extremely active, play driven and confident. Pairing well bred, proper temperament and tested working stock is the first step to cultivating exceptional working and active companion APBTs, but just as importantly is early socialization and stimulation. All Southern Inferno pups are introduced to a variety of environments, noises, animals and people to create a foundation for a very well rounded and confident animal. 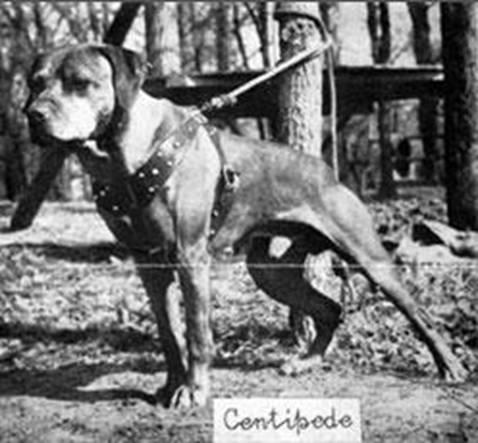 It is perhaps impossible for modern dog people to realize the great reputation that Ferguson’s Centipede enjoyed in the late 30s and early 40s. Perhaps it is sufficient to say that there was never any doubt that he was the best pit dog in the country at that time. Also, more than any other dog, he helped launch the popularity of the Old Family Red Nose strain, although he was more often referred to at the time as a “Lightner dog.” At the beginning of his career, Centipede may not have been a unanimous choice for best dog in the country, as his ability was so great that it was not known if he was game. But his final match was against George Saddler’s Black Boy, and it went two hours and twenty-two minutes without a turn by either dog, with Centipede finally prevailing.

It was the third contest which convinced everyone of what a great dog Centipede was. Saddler was known to scout his opponent in a big money match like the one with Centipede, and he brought a dog that he thought could beat him. The fact was that both dogs had a reputation as bone-crushing pit warriors. I have an original flyer that advertised the fight, much as a modern prize fight, with Centipede being touted as the “Cream of Oklahoma” and Black Boy as the “Pride of the Delta.”

Centipede was whelped about 1933 in the kennels of L. C. Owens in Texas. He was the result of Dan McCoy’s having discovered that there was still some of the old Lightner blood down in Louisiana. McCoy and Bob Hemphill made the journey down to that part of the country and bought several dogs. Hemphill kept his close to the vest, but Dan McCoy was always on the move and couldn’t keep dogs, so he left his with trusted friends, including Arthur Harvey and L. C. Owens in Amarillo, Texas. Owen’s Mickey was bred to the renowned Harvey’s Red Devil to produce the litter which contained Centipede.

When I met Bill Lightner in Colorado Springs, he and his wife were in their eighties, and they kept a kennel of basically small dogs of various coloration. Lightner and his wife were uncanny in their ability to select good brood stock. They had left the red, red-nosed dogs down in Louisiana because Lightner didn’t like the looks of those dogs, and he felt they were coming out too big. Centipede would be an example of that, as his pit weight was 54 pounds. To listen to many modern dog men, the old time pit dogs were never that big, but not only were there these two great dogs at that size, but they each had been matched twice before they were matched into each other. Be aware that pit weight in those days was lighter than today, so the dogs were easily sixty-five pounds on the chain.

Other than size, the only fault with Centipede was that he was a laid back dog and nearly impossible to work. Frustrated, Owens sold him to Earl Tudor. Although something of a genius in working dogs, even Tudor had a problem with Centipede. When he walked the dog, he stayed back at the end of the leash. Puzzled, Tudor stopped and looked at the dog, and the dog lay down! As patient as he was with the dogs, he wasn’t sure that he could ever get Centipede in shape. He decided to rely upon natural ability and endurance for his first contest, which Centipede won handily in less than thirty-five minutes.

The next opponent had a bit of a reputation, so Tudor enlisted his friend Red Howell to work the dog. Now Red was a real genius with dogs, a harbinger to the coming of Ham Morris just a few years later, another gem at training animals. Red never used force in training his dogs, but he understood their psychology. He discovered that Centipede was a natural house dog, and he would do anything for attention. Red’s girls would dress Centipede up in dresses and put lip stick on him, and the dog thrived on it.

Red and Centipede worked out a deal. If Centipede would run the turn table mill for a specified time, he could go in the house after his rub down. Nothing else would work. Centipede was unexcited by cats, and if Red placed a dog in Centipede’s view, his eyes showed fire, but the dog was too smart to not know that the harness was keeping him from getting to the dog, so he didn’t run the mill. Somehow Red was able to convey to the dog that he would get a reward for running the mill. The first time he took a few steps on the mill, Red brought him in the house. Very quickly, the dog got the idea. So Centipede spent a good part of his keep in Red’s house with his young daughters. Howell told Bob Wallace that Centipede was absolutely the smartest dog he ever saw of any breed. He would bring Red a bottle of beer, opening up the ice box to get it. Red swore that he could have taught him to open those bottles too.

The match between Centipede and Black Boy would qualify as a classic contest. The dogs met in the center like a couple of freight trains, and first Black Boy had the upper hand. In fact, the lead changed a couple of times, with its being anyone’s match up until the two-hour mark. At that point, Centipede finally took command for good. Saddler gave it up in 22 more minutes in a desperate attempt to save his dog.

After Centipede beat Black Boy, Tudor couldn’t get him matched, as everyone conceded that he was the best. Nothing his weight, or any weight, could beat him. That was the common opinion among dog men. This was evidenced by the fact that Tudor opened him up at catchweight with no takers. Frustrated, Tudor sold the dog to Dave Ferguson.

Now Dave Ferguson was well known and liked as a pit dog aficionado, but he couldn’t keep dogs, as he played trumpet in a big name band. He toured the country, and he spent a lot of time in New York and in San Francisco. For that reason, he left the dog with various trusted friends in the dog game. Dave was a good hearted guy, and he always allowed that whoever was keeping the dog could not only breed to him, but stud him out as well. Because of this situation and the dog’s great reputation, the dog was bred a lot, and if we trace back our pedigrees far enough, we will find Centipede there some place. We could do a lot worse!

Dave Ferguson was drafted into the army during the second World War, and he received decorations for heroism. None of the dog men were surprised about this, as they had always referred to him as “the little man with the big heart.” Unfortunately, Ferguson was shot and killed by a sniper in the last days of the war. There were lots of losses during that war, but that one particularly threw a pall over the pit dog fraternity.

Centipede died in the yard of D. A. McClintock, another genius with animals and a great lover of the Old Family Red Nose strain. By the time McClintock received the dog, he wasn’t producing any more, but he took care of him and even gave him time in the house. Like Red Dunham before him, McClintock considered Centipede the smartest dog he had ever seen.

Beyond being smart, Centipede was considered a great dog, the greatest pit dog of his time. When someone of those days referred to “the great one,” they didn’t have to mention the name. Everyone knew that it was Centipede